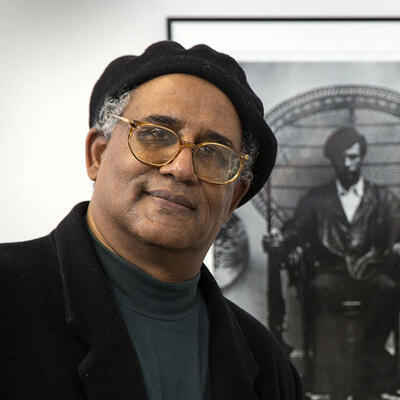 The Committee on Diversity, Equity, and Campus Climate has selected Professor Waldo Martin as the recipient of the 2021 Leon A. Henkin Citation for his extraordinary service towards the academic development of students from underrepresented groups in the academy; his service to advance equity and inclusion through institutional initiatives; and his immense scholarly contributions to the study of African American history, culture, and political struggle.

Professor Waldo E. Martin’s impact on our community as a teacher and mentor has been nothing less than transformative. Not only has Professor Martin served on more than one hundred dissertation committees in various capacities for departments across the campus, but as the only scholar of African American History during his first twenty-five years at Cal, he has shouldered an enormous burden in teaching and mentoring. Of the many supporting letters we received, one former student who is now an Assistant Professor at Princeton University captures his affirmative mentoring the best: “Professor Waldo Martin is a true humanist. He does not shy away from complex conversations about inequality in America and does his best to right wrongs. He teaches students community care and compassion. He models kindness and how to be a good citizen on campus and in the world by taking care of elder professors on campus, gently assisting those differently abled, joyfully welcoming student-parents into the classroom with their little ones on days when the childcare fell through, and creating a space at U.C. Berkeley where everyone and their ideas belong and are recognized. That is rare. That is special. That should be celebrated.”

His commitment to diversity, inclusion, and equity is further exemplified by his past and ongoing work on creating institutional change. He is co-chairing the History Department’s Task Force on Racial Equity and Inclusion, a body tasked with producing a report on and making recommendations for improving the racial environment in History. He is also co-chairing the new History Ph.D. Pipeline Program, which hosts a series of Saturday zoom seminars with prospective PhD students to help them understand the work of professional historians and develop strategies for success and wellness in academia and beyond. Importantly, both the Task Force and the Pipeline Program aims to increase access to educational opportunities and to create more inclusive environments for students of all backgrounds.

Finally, Professor Martin’s highly influential scholarship in the study of African American history, culture, and political struggle must be acknowledged. In recognition of the critical influence of his work, the History Department appointed Professor Martin in 2013 the Alexander F. and May T. Morrison Chair of American History and American Citizenship. His many books and edited volumes exemplify the wide range of his intellectual expertise. They include The Mind of Frederick Douglass (1984), No Coward Soldiers Black Cultural Politics in Postwar America (2005), Black Against Empire: The History and Politics of the Black Panther Party (co-edited with Joshua Bloom, 2013, second edition 2016 with a new preface), and Brown v. Board of Education: A Brief History with Documents (1998, second edition 2020). Professor Martin is also co-editor of the prestigious John Hope Franklin Series in African American History and Culture, published by the University of North Carolina Press.  For more than two decades, Professor Martin has also co-directed, together with Patricia Sullivan and Henry Louis Gates Jr, the NEH Summer Institutes on Teaching the Modern African American Freedom Struggle for college and university teachers. Taken together, they illustrate the great breadth and deep, enduring impact of his scholarly contributions to date.

We thank Professor Waldo Martin for his tireless and uncompromising commitment to advancing diversity and equity through mentoring, service, and scholarship. The influence of his work is immeasurable, reaching well beyond the campus and carried forward by the generations of students whose lives he has touched over the past three decades of his career. Recognition for his service to the university is long overdue. The Committee on Diversity, Equity, and Campus Climate expresses its deep gratitude for his extraordinary contributions. We are honored to present the Leon A. Henkin Citation for Distinguished Service to Professor Waldo Martin.