Created by a bequest from Professor Constantine Panunzio of UC Los Angeles, the Constantine Panunzio Distinguished Emeriti Award honors outstanding scholarly work or educational service (e.g., service in professional, University, Academic Senate, emeriti, departmental, or editorial posts or committees) performed since retirement by a University of California emeritus or emerita in the humanities or social sciences. This is a UC-wide prize.

Emeritus Professor of Hebrew and Comparative Literature at UC Berkeley

Robert Alter took up emeritus status in 2011 after an illustrious career on the Berkeley campus that began in 1967. He has officially been retired for eight years, but this period has actually been one of his most productive decades since he began his prolific association with our campus. With the publication this year of his three-volume The Hebrew Bible: a Translation with Commentary (by W. W. Norton & Co.), a staggering 3,500 pages, Alter accomplished the mammoth project that he began in 1996 with his acclaimed translation with commentary of Genesis. The Hebrew Bible volumes are the first complete English translation of the Old Testament since the King James Bible in the early seventeenth century! This is an extraordinary achievement, as has already been acknowledged worldwide. Alter has done remarkable work both as a translator and as a literary and historical critic of Biblical literature.

During this same eight-year period Alter published books on the Former Prophets and on the Biblical books of Ruth, Esther, Jonah, and Daniel, which are now incorporated in his complete translation. Since retirement, he has received numerous honorary degrees and other prestigious awards. He continues to teach and since 2013 has directed our Center for Jewish Studies.

He has achieved the greatest possible distinction as a literary critic of the novel, and has single-handedly created the fields of Biblical narrative and Biblical poetry. With his translation of the Hebrew Bible he has published a masterpiece. He was eminent long before he retired but he has augmented that status as an emeritus professor in a quite remarkable way.

Past Awardees from UC Berkeley: 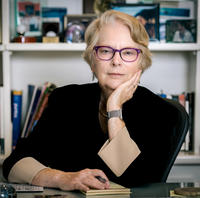 Emerita and Distinguished Research Professor of History at UCLA

Lynn Hunt, UC Los Angeles, Emerita and Distinguished Research Professor of History, retired in 2013. Before coming to UCLA, she taught at UC Berkeley from 1974 to 1987, and then the University of Pennsylvania. She is an internationally renowned historian and leading scholar in her field. Her work on the French Revolution is classic and she has made influential contributions helping to shape a range of intellectual inquiry from historical methodology, new historical research approaches, debates between historical truth and narrative, human rights, and assumptions about time. Since retirement, Professor Emerita Hunt has published three books, the substantially revised Writing History in the Global Era (2014), which has been translated into Japanese, Chinese, and Turkish, The French Revolution and Napoleon: Crucible of the Modern World (with Jack R. Censer, 2017), and History: Why It Matters (2018). Additionally, she was elected as a Corresponding Fellow of the British Academy (2014), was the Humanitas Visiting Professor at Trinity College, Oxford University (2014), and has been named by the American Council of Learned Societies as the 2019 Charles Homer Haskins Prize Lecturer. Professor Hunt displays a luminous scholarly acumen and is a greatly admired and respected colleague. In addition, her dedication to teaching is widely recognized and she is considered a generous undergraduate teacher and graduate mentor.